There is no greater agony than bearing an untold story inside you. – Mary Angelou

I’m a storyteller at heart. In fact, I think we’re all storytellers. The ability to communicate through stories has been a human trait since the beginning of humankind. Some have a greater desire to tell stories than others. We call those crazy people writers. I’m one of them.

A little later in this post, I’ll be sharing the second chapter from my book At The Crossing Of Justice And Mecry. If you missed the first chapter, you can find it in the post, Fiction: One Thing Leads To Another. If you’d like to learn more about The Cult Trilogy, check out my Books & Music page.

Tell Your Story Or Forever Hold Your Peace

Here’s the thing: If you feel like you have a story inside you, tell it. You’ll never get another chance. Nobody else can tell your story. You must.

After I wrote my first book, A Train Called Forgiveness, I thought I’d told the whole story. It’s true, I had told the experience of my childhood in a cult. But there was more. In my second book, At The Crossing Of Justice And Mercy, I continue telling the story that needed to be told. Yes, it’s fictional. But any serious writer knows that fiction is laden with myriad elements of truth.

I Knew If I Didn’t Complete The Story Then, I Never Would

I had no intention of writing a trilogy at the onset, but when the idea for the second book came, I knew I had more inside me. And I’m not done yet. I have several ideas for future books. I’m certain I’ll start writing when the time is right. So before I share a little more of my book with you, I ask you this: Do you have a story inside you that needs to be told? 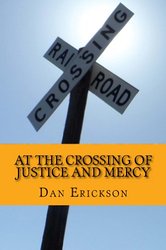 As the first moments of 2015 approached, I sat in my reclining chair, dumbfounded.  I couldn’t believe that Peter Smith might still be alive.  I read Simon’s email again to make sure I hadn’t misread it the first time.  It said:

I think Peter Smith may still be alive.

How could Peter Smith still be alive?  After my run-in with Russell, my brother Joel and I had done a little research.  Joel had found some kind of official death notice on a Washington State website.  In my mind, Peter had been dead for more than ten years.  No, he couldn’t be alive.  Or could he?  Somewhere deep inside, I’d always doubted Peter’s death.  After all, Peter Smith mastered the art of deception.  But I’d figured my emotions were just playing tricks on me.  In a sense, anyone with such a profoundly negative influence on a person, never dies.  They live on, inside your head, haunting you… forever.  Dead or alive, Peter Smith is etched into my memory.

Simon included a link with his email.  I clicked on it.  It brought up an official document from the State of Arkansas.  The document concerned a corporation that had been formed in 2003.  My heart nearly stopped when I saw the name of the business: “Peter B. Smith, Inc.”  “Okay, so Peter Smith is a common name,” I said to myself.  “It could be anyone.”  I kept reading.  I scrolled down to the Board of Directors.  Three of the five members of the Board were names I knew: Russell R. Willis, Joshua T. Larson, and Amy S. Smith.  Mysteriously, Peter’s name escaped the Board of Directors.  As I continued to study the document I also noted that the corporation officially dissolved in 2007.

Why had Simon sent me this email on New Year’s Eve?  I’ve heard it said that whatever happens on New Year’s Eve will predict your entire year.  Happiness begets happiness.  Anger begets anger.  Sadness begets sadness.  I’d been sent a mystery on New Year’s Eve.  Would 2015 be a year of mystery?  I knew my curiosity would lead me to dig deeper.  I wanted to uncover the truth.  Charlie stirred at my feet and looked up at me with his sad, loyal eyes.  “Hey, boy,” I said.  “It’s time to kennel up.  Good dog.”

I replied to Simon’s email:

Two things: First, although the name of the business is “Peter B. Smith, Inc.,” his name is not on the Board of Directors.  Perhaps Russell and the others simply named the business in honor of their dead leader.  Second, a few years ago, Joel found a record of Peter’s death.  I think it was on a Washington State website.

It was late.  The New Year had come, 2015 in a shroud of mystery.  I was dead tired.  “Goodnight, Charlie,” I softly called, as I stumbled to my bedroom.  But I couldn’t sleep.  What if Peter Smith were still alive?  What would that mean?  It would mean that Russell lied to me back at The Silver Frame.  It would mean that Peter had, somehow, manipulated the system, making it appear that he died.  It would mean that he instructed his followers to claim that he’d died.  But why?  Why would he want people to think he was dead?

Over the years I’d often struggled with my feelings about Peter Smith.  Since learning of his death, I’d always felt a little relieved, as if there were one less harmful thing in this world, one less threat.  I wasn’t happy that he was dead, but I felt a little more secure, knowing he couldn’t hurt me or others, anymore.  A part of me had always felt a deep sadness about Peter Smith’s death.  If he truly died suddenly as Russell claimed, then Peter never had a chance.  He never had a chance to ask his victims for their forgiveness.  Not that he would have, but I’d always wanted to believe he might.  And although I’d forgiven him years ago, there was still a part of me that wanted him to be alive.  I wanted him to be alive so I could find him, see him, face to face.  I wanted him to be alive so I could look him in the eye and tell him how much harm he did to me, how he tore apart my family.  I wanted him to be alive so he could ask for, and receive, my forgiveness.

After laying awake in deep thought for what felt like hours, I finally drifted into a restless sleep.  Early that morning, on New Year’s Day, I woke up to the sound of my father’s voice.

You just read the second chapter from my book, At The Crossing Of Justice And Mercy. If you’d like to learn more about my books, please check out my author page at Amazon.

If you’d like to learn more about finding and developing creativity, take a moment to sign up for The Creative Side newsletter. Just click the link below to get started:

Join The Creative Side