The secret of getting ahead is getting started – Mark Twain

When I was a kid, I got a brand new bicycle for my 7th birthday. I was excited. So were all my friends at my birthday party. Everyone cheered me on. The pressure was too much. I couldn’t get started.

The next day, when I was all alone, I went out to the garage, got out my bike, climbed on, and rode down the street. From that moment on, I rode my bike everywhere. Once I got started, I just kept going.

Getting Started At Creativity Is Half The Battle

I know a lot of people who claim they don’t have a creative bone in their body. It’s more likely that they just have never gotten started. When I finally decided to write a book a few years back, it was getting started that created the momentum to complete the project. I’ll be sharing the start from my first book, A Train Called Forgiveness, later in this post.

I’ve got to be honest with you. A Train Called Forgiveness was actually my second or third attempt at writing a book. I wrote a journal version of the story 10 years earlier. I wrote more than half of another fictional work 7 years earlier. Why did I quit? I didn’t. It was all practice.

Don’t focus too hard on starting. Just do it. Start. If it doesn’t work, it doesn’t work. But at least you’ve gained some skills for your next go. And your next go might be the one that takes. After all, I didn’t write my first book until the third attempt. 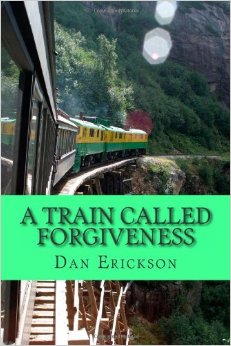 A Train Called Forgiveness: Chapter One

Check out the audio sample, narrated by Bill Cooper.

I’m a burden to you.

My name is Benjamin Andrew Burden.  I go by Andy, or sometimes just A.  I’m 27 years old.  I live in a 20-foot trailer in the middle of an apple orchard in Jocelyn, Washington.

It gets lonely out here.  I don’t mind.  It gives me time.  After all I’ve been through, I need time.  I need time to think.

I work overnights at the Y-Easy-Mart.  It’s a convenience store out where Highway 2 meets Highway 97.

Nights off, I play guitar, write songs, read.  Anything to keep my mind busy.

Sometimes, I drink a little beer.  I used to smoke weed, but I started getting paranoid.  So I quit.

I thought people were following me.  I thought they were out to get me.  Sometimes, late at night, I’m still scared.  It feels like someone is watching me.  I don’t know why.  It’s just a feeling.

I think it has something to do with my past.

I was in a cult when I was a teenager.  That’s right, a cult.  You know, a group of people that are foolishly loyal to an egotistical leader.  Remember Jonestown?  Well, it wasn’t that bad, but it was bad.

I went to church last week.

It’s the first time I’ve been to church since before the cult.

Dad used to be a minister back in Camber Creek, Maine.

Last week, it was an Assembly of God church over in Andersberg, just up the road from here.  I know the minister there.  His name is Larry.  He works with me at the Y-Easy-Mart.  Being a small-town pastor is a tough gig.  He has to subsidize.

At church, Larry asked everyone to close their eyes and bow their heads.  Then, instead of praying, he asked a couple of questions.  There were about 15 or 20 of us, mostly younger.

First he asked, “Are you certain you’ve been saved?”

He asked us to raise our hands.  I didn’t raise mine.

Second, he asked, “If you were to die today, are you certain you would go to heaven?”

Again, he asked us to raise our hands.  Again, I didn’t raise mine.

After the service, Pastor Larry talked to me.  I thought he was going to have me pray the “Sinner’s Prayer” and accept Jesus.  He didn’t.  He said, “Andy, you were the only honest person here today.”

That got me to thinking.

Why didn’t I raise my hand?  I was brought up a Christian.  I had a religious experience a couple of years ago.  Some might call it a salvation experience.  I read my Bible most everyday.  I pray.  I believe in God.  Still, I didn’t raise my hand.

I thought about it.

Like Pastor Larry’s heaven, it’s always a future event.  To reach paradise, we have to act.  We have to give something, sometimes, something precious.

In the cult, we worked like slaves.  If we screwed around, they’d rough us up.  There was a strict set of rules.  There was a single-mindedness.  We worked to create paradise.  Paradise never came.  In fact, things got bad.

So, that’s how I feel about heaven now.  It’s always a future event.  What about the present?  What about Earth?  Why do we focus on where we go when we die?  I’m alive.  Nobody really knows what happens when you die.  They just want you to believe they do.  Nobody really knows.  It’s a lot like the cult.  They’ll tell you there are absolutes, but…

Nothing is certain.  Nothing.

I guess that cult mixed up my understanding of God.  Or maybe it’s helping me to understand God better.

This story starts in Camber Creek, Maine about 17 years ago.

It was springtime.  The moving truck was in the driveway.  I carried a large box, stuffed full of pictures of people, snapshots of places, memories.  I spent several years in Camber Creek.  Now, I was leaving it behind.

Out the door to the truck, I tripped.  The box flew.  There, on the ground, was my family history. Glass shattered.  Pieces scattered.  It was an omen, a prediction.  I didn’t know it then.  I was too young, too excited.

I had known for a few months we’d be moving.  “Going West.”  Dad told me great things were happening in Washington State.  He said we were going to a town called Bonneveldt.

We loaded the truck.  Soon the house was emptied.  My room, missing what made it mine, was lonely.  The emptiness echoed my past, my beginning.

Our lives were packed into boxes and stacked neatly in the truck.  Still, something felt chaotic and uncertain.  Dad turned the key.  The engined hummed.  He shifted into drive and we began to roll into the unknown.

Friends hadn’t believed me.  “Moving?  Yeah right.”  They waved as we pulled out.  I watched them riding their bikes toward the ocean.  I stared through the glass, without tears, as Camber Creek faded away.

But the sound does not soothe me tonight.

Lately, the voices are back.  They come and go.

In the cult, whenever you did something wrong, they screamed at you.  Once, a boy, Jimmy, ran away, they hunted him down, found him in Eugene, Oregon, hauled him back, beat the shit out of him in front of us.  He bled.  They instilled fear in me.  It’s been over ten years now, but I still feel the fear.  I moved across the Cascade Mountains, searching for peace, space, solace.  I try to escape the mean, accusatory, condemning, murderous, voices.  They always follow.  It’s as if they’ve been planted deep into my soul.  Most of the time I can keep them in check, but…

Once, about a year ago, they got so loud, I just ran.

I ran from Jocelyn to Andersberg, five miles, without stopping.  It was winter.  I wore no coat.  It was dark, early morning.  I jumped a fence in one swift motion and sliced my hand.  I didn’t even notice I was bleeding.  The cops saw me running.  They stopped me, asked questions, thought I was crazy,

and let me go.

We stopped at Grandma Evelyn’s house in Farmington, New Hampshire.  She was confused.  Why were we moving 3,000 miles away?  Dad spoke, again, of great things happening “Out West.”  I didn’t understand.  Grandmother cried.  We left.  I was sad.

The drone of wheels on the road comforted me.  I felt connected somehow, to the highway, the earth.

It was late June, the weather was welcoming, the sky, clear.

I remember a State Park in New York, camping by Lake Erie.  I remember hiking over sand dunes in Indiana.  I remember.  We crossed the border into Michigan, just to eat at Burger King.  We broke down somewhere in Iowa.

Then we drove further west.  We drove through the wide-open prairie.  It surrounded me.  The prairie hugged me.  It seemed to hold me close.  I felt safe within its vastness.  I felt a sense of peace.

West of the Dakotas there was a change, something ominous.

The mountains cast dark shadows. Thunderstorms formed.  My brother Simon burnt his hand.  My brother Joel got sick.  Idaho was scorching, the 4th of July, dull.  Mom was sad, disappointed.

The final stretch was a drag, laborious.  The journey foreshadowed things to come.

I read.  I’ll do anything to soften the voices, reduce fear.  Lately, I’ve been reading the Bible, chronologically.  The Old Testament is violent.  This morning, I’m reading the dictionary, sporadically.  I look up the word deception.

Deception: 1. a deceiving or being deceived, 2. an illusion or fraud.

I think back to the cult.  Was it a deception?  An illusion?  A fraud?  What is deception?  If someone believes something is true, are they deceived?  Or, is pure belief, in anything, a form of faith?

I like to question things.  Sometimes, I over-analyze.  Some say I have an overactive mind.  Maybe, that’s where the voices come from.

Outside the trailer, day approaches.  Birds begin to chirp.  Light splinters through the windows, bringing a touch of warmth with it.  I grow sleepy.  I ponder things as sleep comes.

Rest comes, eventually, to the weary at heart.

Note: As I mentioned, I wrote the first draft of A Train Called Forgiveness, on this blog. I wanted the story to be direct. I wanted it to move quickly. I also wanted to write in small chunks for easier online reading. That’s why each chapter is split into shorter sub-chapters.

Would You Like To Get Started At Being More Creative?

If you’d like to read more of A Train Called Forgiveness, you can get three chapters for free when you sign up for my monthly newsletter. The newsletter is meant to help motivate you to get creative. It includes tips, inspiration, and news about what’s going on at the blog.

If you’d like to buy A Train Called Forgiveness, it’s available at Amazon.

Join The Creative Side